Sad news. One of my favorite days during my time in Chicago was spent packed into the cab of the Geology Department pickup with Bill Turnbull and Bill Simpson driving to Rainer Zangerl's home several hours south in Indiana.  I helped Simpson pack specimens and documents from Zangerl's basement while he and Turnbull caught up on the front porch and shared iced tea (both had started at the Field Museum at about the same time). It was a sweaty, dusty, silverfish-filled day, but also filled with great stories and time spent with Bill, and I remember it fondly.

It is with great sadness that the Geology Department marks the passing of Curator
Emeritus William D. Turnbull. Bill passed away Wednesday following a short illness.
Born in 1922 in Milwaukee, Bill attended the University of Wisconsin, Milwaukee
and graduated in 1942. After serving in the Army during WWII, Bill joined the Field
Museum as a fossil vertebrate preparator in 1946. Bill earned his Ph.D. degree in
Paleozoology from the University of Chicago while working at the museum, and
ascended to the post of Assistant Curator of Fossil Mammals in 1956. He was promoted
to Associate Curator in 1963, and again to Curator in 1973. He also held lecturer status
at the University of Chicago and University of Indiana at South Bend, and was a
research associate at the University Texas at Austin and the Western Australian
Museum. He served the Society of Vertebrate Paleontology as Vice-President from
1975-1976 and as President from 1976-1977. Bill retired in 1987, but continued to come
to work daily as long as weather and health permitted.
Bill was an avid field paleontologist and his collecting efforts ranged widely in the
US from the South to the western states, as well as farther afield in Australia. He made
significant contributions to the Museum’s collections, and his collections of Eocene
mammals from the Washakie Basin are spectacular. Several of Bill’s most spectacular
finds are on display in Evolving Planet, including the mosasaur Globidens, the turtle
Naomichelys, and the aïstopod amphibian Pseudophlegethontia turnbullorum named in
honor of Bill and his first wife, Priscilla. Bill’s scholarly publications ranged widely,
covering topics such as jaw mechanics of archaic Mesozoic mammals, descriptions of
marsupial and rodent faunas of the Australian late Neogene, to Pleistocene mammals
of the Midwest. Bill was working on manuscripts on the remarkable Eocene finds he had
made in the Washakie Basin in Wyoming, the mammalian fauna from the Madura Cave
in Western Australia, and on the history of the department, when he fell ill.
During his long tenure at the Museum, Bill interacted with generations of
scientists, ranging from Elmer Riggs, the first vertebrate paleontologist in the Museum’s
history, to the current cohort of curators. He collaborated with colleagues from across
the globe. He will be remembered as a dedicated professional, a wonderful citizen
to the department and the institution, and as a warm and caring family man. His
legacy lives on in innumerable ways, including in the many specimens and scholarly
contributions with which he enriched our exhibits and science, and in the memories we
all have of his life as a Museum scientist.
Bill is survived by his wife Hedy, his stepdaughter Eve Band and her husband
Steve and their two daughters; his granddaughter Lindsey Goodwin; his stepson Harry
Brotman and his two daughters; his brother Alan Turnbull, sister Jane Przedpelski, and
their spouses and children. Condolences can be sent to:


More than a decade of disappointment with the quality of my casts is over, the day has finally arrived where I have assembled and tested a fantastic system for making itty-bitty casts with which I am extraordinarily happy.  After my exciting and implosive night back in June, the start of this fiscal year has allowed me to procure a new vacuum chamber, finally completing the apparatus for making beautiful bubble-free minute molds and casts. There are a number of publications detailing protocol and equipment for achieving these (e.g. Reser, 1981; Davies, 2010; Reser, 2011; and Cavin, 2011), our process most closely follows that refined by Reser (2011). Equipment includes a Welch Duo-seal 1402 vacuum pump, a Smooth-On branded five gallon vacuum chamber, a digital scale, and a 2.5 gallon pressure pot.

Test specimens were molded with Polytek Platsil 73-25 RTV silicone rubber, and cast using Smooth-On Smooth Cast 300 pigmented with Polytek Polycolor Brown (approx 1 drop per 100g). Specimens were clayed-up in standard fashion, including imprinting the specimen number into the sulfur-free clay. Silicone was de-aired in the vacuum chamber, and a very thin coat was painted onto the surface of the specimens. A light stream of air (~15psi) was passed across the silicone to spread and pop any air bubbles that might remain, and the remainder of the rubber was poured to cover the specimen completely.


Upon demolding 24 hours later, the silicone molds contained no visible surficial air bubbles, even at 50x magnification. Casts were produced by painting in a thin coat of Smooth Cast 300, making sure that there were no trapped bubbles, quickly pouring the rest of the resin, and then the mold was pressurized to 40psi for 15 minutes. At this point, the resin was completely cured and demolded. Pressure cast examples showed no air bubbles at all in the final cast, while those that were merely painted and poured contained some bubbles at or just below the surface. Once the molds are made, the entire process of casting one specimen, including setup and cleanup, takes no longer than 30 minutes.

All of these specimens were scanned at UTCT, and we plan to CT scan these casts also. Our next step will be to compare the fidelity, ease of production and handling, and final costs associated with methods of digital imaging and printing vs. conventional casting.  A paper is soon to follow. Subsequent blog posts will detail the procurement and assembly of this casting system.

Davies, K., Cifelli, R., Davis, B. and Gordon, C. 2010. A simple microvertebrate molding and casting technique: A 20-year retrospective. Programs and abstracts from the Society of Vertebrate Paleontology meetings, October, 2010.

Kirk, E.C., and Williams, B. 2011. "New adapiform primate of Old World affinities from the Devil’s Graveyard Formation of Texas". Journal of Human Evolution

The research nature of museums

I was asked a question not too long ago about what kind of labs a museum could need and why, and I was pleased enough with my explanation that I thought I'd put it here. The question was a reminder that most people see museums very differently from those of us who work in them on a regular basis.

When I'm visiting museums I often forget that they have exhibits, for me museum trips are typically behind-the-scenes and I rarely make it into galleries for any appreciable amount of time. Most big museums are research institutions whose primary duties are the care and storage of historical or art objects. Many of them are associated with universities, like the Texas Memorial Museum (UT) which has public exhibits, and specimen collections are spread out through several buildings across campus. Others, like the University of California Museum of Paleontology (Berkeley) have limited exhibit space and exist predominantly for research and educational purposes. Curators in large private museums are often faculty members or otherwise associated with local universities and advise graduate students (e.g. American Museum/Columbia University, The Field Museum/University of Chicago), using the museum resources to train scientists. In most museums, the exhibited specimens represent only 1-2% of the institutional holdings. UT, for example, has hundreds of thousands of vertebrate fossils in our collections, and 20,000 recent animal skeletons. All of these objects require varying levels of work to make them available for study or display, to prevent deterioration, or to repair damage, and that takes place in a wide variety of labs and workshops. So, an art museum will have conservation labs dedicated to cleaning and restoration of paintings, or analysis equipment for determining authenticity of artifacts. A natural history museum will have labs dedicated to CT scanning fossils or mummies, labs for fixing and pinning insects and plants, or slicing up and analyzing meteorites to figure out how old the solar system is. Researchers from all over the world come to visit these collections and sometimes borrow these kinds of objects, so collections managers act as a sort of reference librarian to keep track of, care for, and make available the specimens. These resources are the foundation for how we understand past cultures and the natural world, and the public exhibits are intended to give visitors a window into the knowledge we've gained as a result of that research.
Posted by iPreparator at 11:23 PM No comments:

This afternoon while re-adhering a broken rib to the exhibited mount of Homotherium serum, I was frustrated in my attempts to hold the rib steadily in place while the Paraloid B-72 set. This is a familiar problem for preparators, often we can set a specimen in a sandbox and balance one broken bit on top of the other using gravity as a clamp. Irregularly shaped specimens, or mounted skeletons, as in this case, can create a real challenge to securely reattaching broken elements. Every time I invariably moved, the join would slip and prevent a good fit. Here, gravity was instead working against me, as it sometimes does. Watching this inelegant dance, TMM exhibit designer John Maisano went back to his shop to find a solution; string, or wire maybe, something to replace me in the equation. What he came back with, in a stroke of genius, was a roll of teflon plumbers tape.

He wrapped the tape around the rib and handed the roll to me. I promptly dropped it (gravity again!), and had no choice but to stand there with gluey rib in hand watching it unroll itself down the landform. After John rolled it back up and handed it to me again with a stern warning, I started wrapping the tape around the two halves of the facing rib, clamping them together. Wrapping around the vertebrae provided more support, and loosely wrapping the broken rib to one of its neighbors controlled droop in that plane as well. This method was superior to using adhesive tape or string, which would have been very difficult to remove had they been glued in place. It is far gentler and easier to work than wire would have been, especially considering how delicate these poorly mineralized bones are. A method that will change the way I work, for sure. Thanks, John, for the idea!


Posted by iPreparator at 9:00 AM No comments:

When you absolutely, positively, have to get those last few drops of Paraloid B-72 out of your Koob Tube. Or oil paint. Or toothpaste. The Tube Wringer- 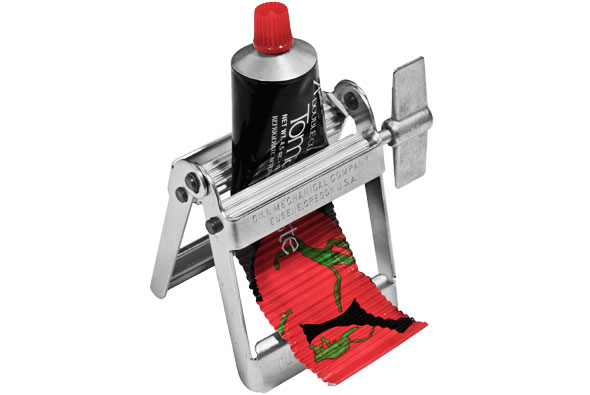