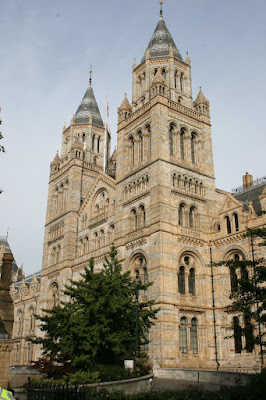 This post brings us back from the surreal world of The Wizard of Oz to the surreal world of vertebrate paleontology. I'm finally following up on a post-SVP promise to chronicle the tour of the Paleontological Conservation Unit at The Natural History Museum in London. The day began standing around the front gates until a helpful fellow attendee who read the directions (Greg Brown) pointed out that we should be using the side entrance for staff and visitors. Thanks Greg. 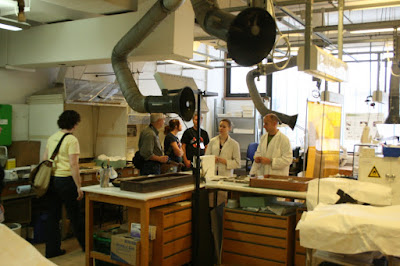 I think it would be fair to describe the PCU facility as cavernous. Despite my best efforts I couldn't capture more than, say, 26.2% of the lab in any particular photo. The first one is looking towards the corner where fossil preparation takes place. I've long been interested by the PCU as laid out on their website (links are all dead thanks to a remodel), which defines all aspects of working with specimens based on the corresponding roles within the fields of conservation and preparation. In principle this sounds really great, but after seeing the operation more or less in practice (at least in demonstration) I've begun to rethink some of my preparation philosophy. That topic probably strays too far afield for this post, so we'll get back to the tour already in progress. 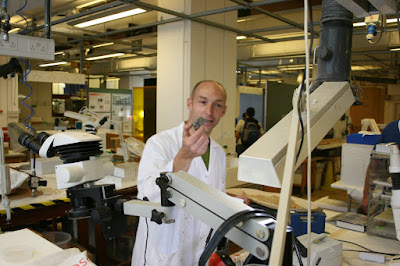 PCU Fossil Preparator Scott Moore-Fay holding up a specimen that he is working on, that may have been a trilobite, time is the enemy of my memory. He has a very nice Leica stereo microscope mounted on an articulating arm, and a helpful bellows-adjusting head. There is a ring-light mounted on the objective, good lighting around the workstation, ceiling mounted exhaust, and a plethora of overhead electrical outlets that I like to have everywhere to eliminate extension cords. 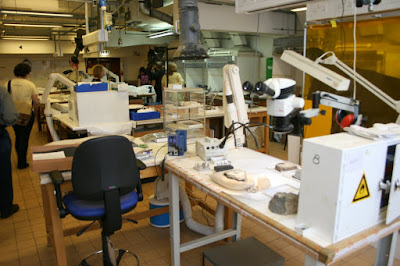 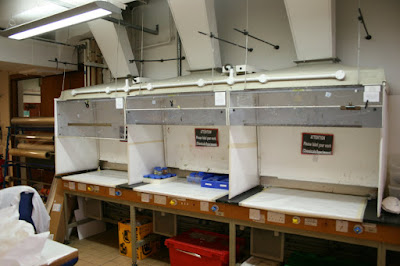 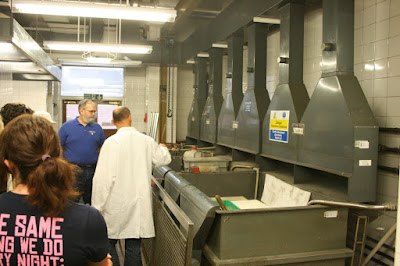 We are going to leave the main lab briefly and step down a corridor to the acid preparation lab. Holy smokes, another whole lab for acid preparation? Yup. In this photo you are seeing a little over half of it. Look at these great, ventilated acid baths. Acid can be fed into them from an outdoor storage tank that might be around 300L, though I may be wrong on quantity. I also recall that this lab uses acetic acid almost exclusively, but that can also be corrected by those more knowledgeable. I'm going to break this post here so I can get some other things done, and will follow up with the rest of the tour, finish off in the acid lab, and discuss the conservation aspects of the PCU. This might also be a good place to point out that Scott is the only full time staff preparator at the Natural History Museum. Amazing, I know. For those who haven't worked in an institution this size, it can be tough to wrap your mind around the fact that there could be something in the neighborhood of 1000 years or more of backlog preparation in the collections alone, which seems like it represent great job security for that lucky dude or dudette.
Posted by iPreparator at 6:04 PM 2 comments:

This day in paleontology history...

Well, it might not have been this exact day, but at some point, roughly a couple of days after Thanksgiving 1999, I completed my 20+ hour drive from Chicago to Orlando Florida, after my term on the Sue project, to start my new job at the Field Museum's satellite preparation lab at Disney's Animal Kingdom Themepark. 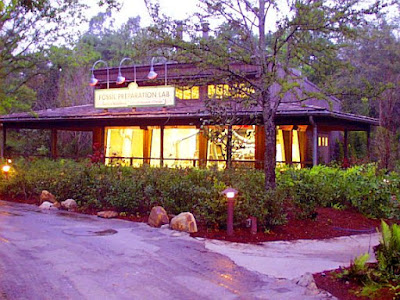 I moved in with Casey Holliday and his roommate Tom Mullane, who worked for Disney Education, for a couple of weeks while I found an apartment, just 10 very short years ago.

The lab was built by Disney for the Sue project, which they cleverly funded in partnership with McDonald's, United Airlines, the Field Museum, and others. Disney had the "Dinosaur" movie in the pipeline, and created Dinoland in Animal Kingdom as a product tie-in.

During the Sue project, Casey Holliday, Bruce Schumacher, and Joanne Avery prepared over 50% the skeleton in this lab. I arrived after Joanne left, and Bruce was on his way out to his new job with the US Forest Service, and I brought a microscope and some fossils from the Triassic of Madagascar. During the next 11 months, Casey and I prepped the Triassic material, some Cretaceous 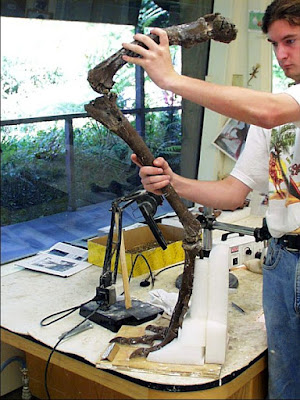 Malagasy material (titanosaurs, croc and theropod bits) and a juvenile tyrannosaurid collected by Elmer Riggs in Alberta in 1922.

Here I am at the age of 18 in a rare, non-bearded photo, holding up the right tibia and femur of that tyrannosaurid. Behind me is the view out of one of our 3 glass walls. This lab was in the middle of a theme park with a capacity of about 35,000 people, which was often met during busy travel periods. Overall, it was an odd place to work, but tons of fun. Casey is a great guy to work with, and the ability to go over to MGM Studios over lunch and ride a roller coaster, Aerosmith's Rock n' Roller Coaster no less, makes the best job in the world even better. 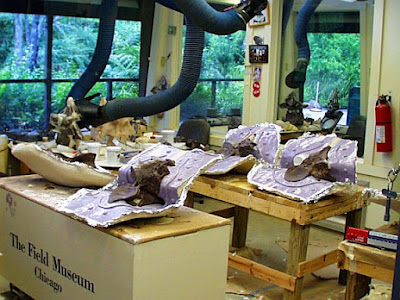 The lab, full of molds of Sue's cervical vertebrae. 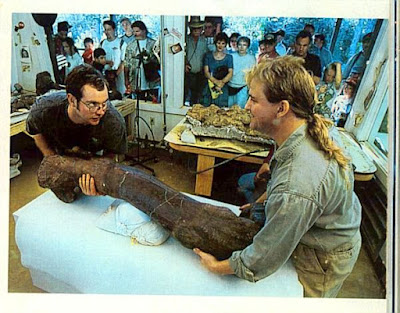 Casey and Bruce moving Sue's femur with a crowd of onlookers, in National Geographic, 1999. As weird as this place was, I'd go back to work there in a heartbeat. Disney had student members of it's college program work outside the lab in costume, making presentations to large groups of visitors. The lab was situated near the exit of the "Tarzan" live stage show, which seated a few thousand people. Every hour or so, the show would dump, and the path leading by this glass became one of the exits for the show, exposing us to more visitors in 15 minutes than most museums get in a week, a day for the very largest.

The extreme humidity of central Florida led to frequent problems with the air abrasive units, but the most interesting of troubles came from the exhaust system. The Nederman arms were ducted to a blower on the roof, and when blasting through many pounds of sodium bicarbonate the blower would "clog". Once every two weeks or so we would have to climb up on the roof, and remove an access panel to expose the fan blades. The sodium bicarb would build up on the blades and form a pumice-like rock that had to be chipped off with a hammer and putty knife. This maintenance was critical, because the buildup threw the fan so off balance that not only would it rattle the walls, but the floor itself. Firing the system back up after this cleaning was always awesome, sending up an ejecta of white powder that drifted over Dinoland. The ladder to the roof was also handy for climbing up to watch shuttle launches. After work was a great time to walk through this giant zoo with a beer and check out the animals, or catch a safari ride, and maybe make plans to head to the Big Bamboo Lounge, a hole in the wall Disney hangout that deserves it's own tribute post.
We also kept a minifridge stocked with Corona and limes, which made the lab a popular aftershift hangout for the education staff.

Sadly, as soon as the Field Museum contract was up, Disney bulldozed the lab to build a roller coaster. I got them back by knocking down a couple of their streetlamps with the moving truck on my way out of the park. Thanks Casey for providing the photos, all of mine were stolen by a psychotic former co-worker.
Posted by iPreparator at 1:03 PM 4 comments:

For your reading pleasure, I have some more preparation related PDF's, courtesy of the Geological Curators Group and the GCG Archive. Thanks to Amy Davidson for scouring these back issues and providing some recommendations, especially regarding adhesives.

Check out:
Geological Curator Volume 5 no.7 (1987) Proceedings of the 1986 GCG Conference which is devoted to the Conservation of Geological Material and edited by Crowther and Collins. Note especially-

Keene "Some Adhesives and Consolidants used in Conservation" p.421.

Others that may be of interest/useful are:

Also relevant in Vol 1,9 is "Problems with Resins at Bolton" by A.C. Howell
and "Data Security in Scientific Objects" by C.P. Palmer.

There are a bunch more out there, if you happen to come across anything that you find helpful in your journeys through the literature, shoot me a message and I'll post it. Thanks again to Amy for kickstarting this, and to the good folks at GCG for hosting this content and not charging $35 per article to download it.
Posted by iPreparator at 7:12 PM 1 comment: