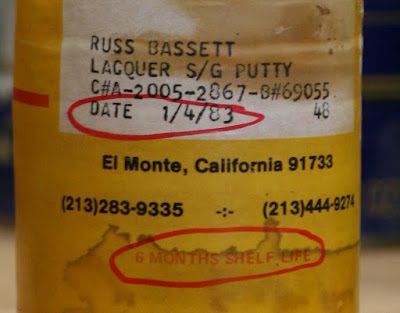 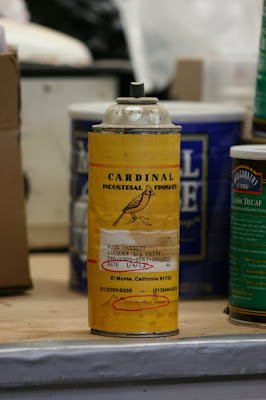 Don't let this happen either.
Posted by iPreparator at 3:41 PM 2 comments: 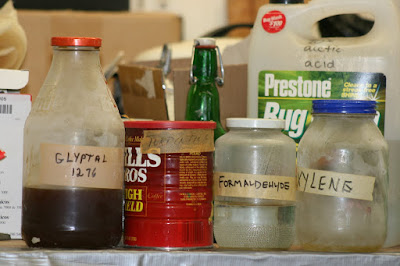 Have you seen a situation like this before? Sure, it is very convenient, and cheap, to store lab chemicals in food containers. But it's not cool. For one, the turpentine in that coffee can isn't much use now that the volatiles have all evaporated out. Then, what the hell is the white powder all over the mayo jar of xylene? I don't think it is mayo. I think this kind of storage is against the law, though I can't find a reference immediately, but it certainly violates both recommended practice (see NIOSH/CDC guide) and common sense.

The Grolsch bottle in the background full of acetone reminds me of a story from a few years back, a friend was working on his boat, and pouring waste epoxy into a nearby empty beer bottle. A few minutes later, when reaching for his bottle full of beer, he grabbed the one with epoxy in it. One short trip to the emergency room later and a cheap and handy way to dispose of a chemical becomes neither cheap or handy. A final example before I go. One prolific collector that I know loves to store thick solution adhesives (i.e. Vinac B-15) in little Visine eyewash bottles. Well, sure, they work well for dispensing adhesive cleanly and one drop at a time. But in the field, have you ever gotten dust or dirt in your eye, and wished for eyewash? Does a foreign object in the eye blur your vision? Might you consolidate your eye closed? So much for getting the red out.

Be Cool. Only store chemicals in properly labeled containers not intended for food use.
Posted by iPreparator at 8:43 AM No comments: