For a field of study purporting to be a science, it is amazing how much of paleontology remains blissfully unaware of how its methods actually work. As a prime example I submit: The Mixing of Plaster.

My ire was raised again on this topic while unpacking some field jackets collected earlier this summer by another field crew. Instead of gleaming white plaster, or at least mudcaked but well-set plaster, we found fuzzy green and brown, soft, powdery, damp field jackets. There was so much moisture in the incompletely cured jackets that they had molded. I've dealt with so many floppy, improperly cured jackets over the years that I just don't think I can take it anymore.

This topic will follow the model of the SVPOW folks and their MYDD campaign. Thus I say, Follow The Damn Directions (FTDD)! [Sidebar: This commentary will eventually be followed by posts, talks, and papers of expanded theme, Publish Your Damn Preparation Methods (PYDPM)]

Despite the fact that almost every paleontologist who has ever lived has at some point in their lives mixed plaster, even the Society of Vertebrate Paleontology website says this:
"Is there a proper way to mix plaster?
A2: The Simple Answer:
Slowly pour plaster into 1-2 inches of water until little islands of plaster form. Let sit as is for 1-2 minutes before mixing, mix to a creamy smooth consistency. After mixing is complete you’re good to go."

Let's take this opportunity to throw any (quite actually widespread and sometimes militant) fairytale notions of island building right out the window. Now, I don't mean to imply that the collective experience of so many field workers should be enough for this to not be a hotly debated topic. I mean to explicitly state that the setting of plaster is a chemical reaction, governed by the properties of the reactants with very predictable results. Manufacturers ALWAYS have recommended mix ratios on the packaging that will yield the optimal results. The shotgun approach answer is akin to dealing with the question "What glue should I use on fossils." First of all, the formulation of plaster that you buy at Home Depot is very likely quite different from the material that comes from Ace Hardware. Take a look at the number of plasters and gypsum cement available from United States Gypsum alone. Almost every one of them requires a different ratio of powder to water. Some of these ratios vary by as much as 45%. Plaster is a generic term that is absolutely meaningless in a technical discussion about how it works, again, just like "glue". First of all, identify the compound that you are talking about, the functional differences between USG Moulding Plaster and Hydrocal White Gypsum Cement are night and day. There are some excellent instructions for mixing provided at their website, but I'll quote as an introduction this:

"Successful mixing of industrial plasters requires strict adherence to specific standards and procedures. The improvements in plaster formulations made in recent years have resulted in more uniform products, but to obtain the full benefit of these improved products, shop procedures must be standardized."

When I was first instructed in the ways of plaster, I was told "This is just like cooking, keep adding ingredients till it tastes right." Which incidentally also ignores the chemical foundations of cooking. Especially while jacketing, I have often seen workers mix a batch, decide that it is too thin, and then keep adding powder to the mixture until it is deemed "thick enough" to bandage. This is almost always wrong. The whole purpose of making a field jacket is to create a rigid enclosure that will protect the fossils riding inside for not only the trip back to the museum, but also the subsequent days or decades until the block is finally opened. I have opened many field jackets from the first 50 years of the 20th Century where the bones were as well protected and intact as the day they were collected. I've opened many from the last 15 years where the ill-fitting, sometimes aluminum-foil-lined, soft and floppy jackets have allowed the contents to shift around and grind the enclosed bones against one another until rubble remained.


First identifying the material you are using, become familiar with how it actually works, then understand how you can manipulate the properties of the material to suit your needs. Don't cut corners or guess. Measuring quantities is not difficult. Even for field work. I like to carry plaster in large Ziploc baggies. Depending on the material, I know how many liters of water it takes to properly set that volume of powder, and can accurately (and even more easily) get the results I'm looking for every time. I can't imagine a situation where a technician in a DNA sequencing lab would prepare a gel by adding a pinch of agarose, a teaspoon of buffer solution, then put it on the stove for a while till it looks right. This is science. Follow The Damn Directions.
Posted by iPreparator at 12:27 PM 1 comment:

The Field Museum of Natural History is one of my favorite places in the world (just behind the entire city of Paris). I worked there as a preparator for seven years, starting the week I turned 18, working on the Tyrannosaurus rex Sue. I spent much of my childhood visiting the museum (back before it cost over $100 for a family of four to visit), I even ditched the first day of my sophomore year of high school and took the train downtown with a friend to visit the museum.

So obviously last month I was quite disappointed when I saw that Chris Norris posted this Sun-Times article(thanks Sun-Times for maintaining your excellent journalistic standards with your wonderful archives, here is another story covering it) announcing the elimination of 50 more positions at the museum.

Around 70 staff positions were eliminated in late 2008/early 2009, which put the museum below "World War II staffing levels", this next round is going to hurt something fierce. Incidentally, there are now 9 vice presidents, which I think is highly likely 9 times the number of VP's from WWII days. The poor institution has been suffering from cripplingly incompetent management for about a decade now, and with about $2 million tied up in executive level salaries, I kinda don't think laying off housekeeping staff and forcing retirements of curators and collections managers will prove to be a sustainable solution. Now that two million is a drop in the bucket of the $180 million in debt that the institution is currently saddled with, but the museum has been digging this hole since the dozers first broke ground on the new Collections Resource Center under the southeast terrace. Of course this project was a critical step in addressing long term storage needs, but the decision to carry through with the construction as planned, after tourism tanked with 9/11, after the state came through with only 20 of the 40 million that they committed to (despite giving the Chicago Bears $420 million of the $660 million it took to renovate-or destroy, if you ask the Historic Register folks who delisted it- their stadium), and after they realized that the Soldier Field construction was going to virtually eliminate parking and turn the museum into a ghost town for several years.

So, with all of that, I'm not surprised that 5 years after I started looking for a job with a future, all museum employees received the following email:

"Dear Colleagues: As you are aware, we had been planning to roll-out an Early Retirement Incentive Program (ERIP) and a Voluntary Separation Incentive Program (VSIP). The details of the programs have been distributed to those individuals who are eligible. The ERIP notifications were delivered to individuals throughout the day today. The VSIP notifications were sent from me via email this morning. If you have any questions regarding eligibility, please contact your manager, or the HR office... "

Even though I'm not surprised, I'm very, very disappointed.  Maybe the museum should start selling off collections again. After all, a museum that doesn't have the professional staff to care for the collections they do have would be better serving the objects by making sure they find a place that can adequately house, conserve, and curate them. Like the neglected dog tied to the tree in the back yard, the specimens will have a miserable shadow of a life until they wither and die a second death, abandoned and uncared for, a fate which would shortly follow for the rest of the grand old institution.
Posted by iPreparator at 8:33 AM No comments: 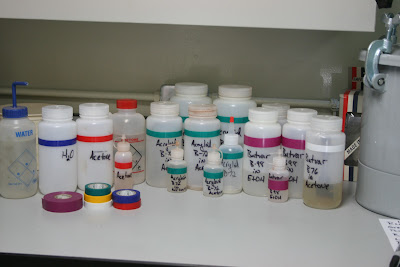 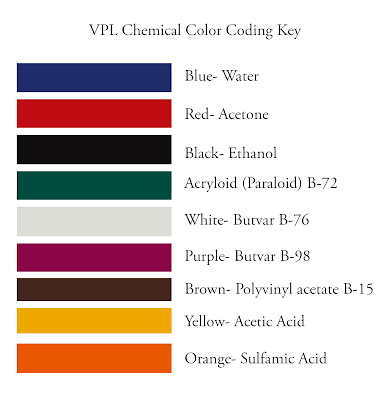 Well over a year ago I wrote this post about the need for storing chemicals properly (safely, in the appropriate containers and well labeled) in the fossil preparation laboratory. Today's post covers some of the material I could just barely fit into my SVP talk in a truly fantastic preparation session yesterday.

When I arrived at VPL I went on a chemical rampage, replacing all of the secondary containers with Nalgene, and ensuring that all were labeled with complete information about the contents. I'll cite again here the NIOSH/CDC chemistry laboratory guidelines, rule one of which is "Never use food containers for chemical storage" in the section Proper Use of Chemical Storage Containers. My initial labeling consisted of writing on the bottle directly with a Sharpie marker, a system which has a flaw in that all of our solvent based resins will rapidly smear the writing when spilled or dripped. To address this I adopted the method in use by Bill Sander's at the University of Michigan, and others, whereby all bottles are identified by colored electrical tape according to an in-house lab specific color coding scheme. This system is posted on signs throughout the lab, and the redundancy of labeling in writing and marking with tape has thus far eliminated the problem that we had previously encountered where the University Environmental Health and Safety office would cite us for the bottle with a label that was smeary and hard to read. Another tremendous benefit to this system is that it reinforces the fact that the adhesives and consolidants in use are distinct chemicals. Users of adhesives in many paleo labs will blanketly refer to any clear liquid as "Butvar", "B-72", "PVA", "Vinac", etc, etc... typically based on the material that they were first introduced to. As can be seen from the VPL color coding key, we have two types of "Butvar" in active use in the laboratory, Butvar B-76 and Butvar B-98. These two compounds have very different practical uses and should not be considered interchangeable. A distinct and obvious system like color coding promotes recognition of these different materials.

[It is noted that there is a mistake in the color key, Acryloid B-72 is not labeled as being Green, the color that corresponds to it in lab labeling]
Posted by iPreparator at 8:45 AM 1 comment: