The Field Museum will be hosting the 3rd Annual Fossil Preparation and Collections Symposium in Chicago from April 28-May 1, 2010.

I organized the first meeting at Petrified Forest National Park, which was a great success, about 45 people showed up, and we all had a lot of fun (pictures here, thanks ReBecca). J.P. Cavigelli hosted the next meeting this summer at the Tate, with I think about 65 or 70 attendees, which was also fantastic {update, some pics here, thanks again ReBecca}. Thanks to the Field, Geology Department Chair Pete Makovicky, and host Lisa Herzog for taking the reins in 2010.

A major contributing factor to the success of these meetings is presentations from people like you! If you have an idea for a talk, poster, or workshop, hurry up and get in touch with Lisa.


"The Field Museum is located on the shore of Lake Michigan in downtown Chicago and has a long history of vertebrate fossil preparation. It currently houses three operational fossil preparation laboratories, employs five full time preparators, and maintains an active volunteer program.

The three day symposium will feature collection tours, platform and poster presentations, roundtable discussions and preparation workshops. This is a distinct opportunity for fossil preparators to meet and talk with other professionals and volunteers in the field.

Any questions or comments should be directed to the conference organizer Lisa Herzog at lherzog@fieldmuseum.org or 312-665-7626. Suggestions for roundtable discussion are welcome."
Posted by iPreparator at 8:14 PM 4 comments:

After downloading a number of pdfs last week, I thought I would help make some of these easier to find.

(Free if you have institutional subscription, if not, send me an email)
(Stabilizing inverts)
A Method for the Preparation of Fossils
Author(s): G. Arthur Cooper
Source: Science, New Series, Vol. 77, No. 1999 (Apr. 21, 1933), p. 394
Published by: American Association for the Advancement of Science
Stable URL: http://www.jstor.org/stable/1656997

My powers are godlike 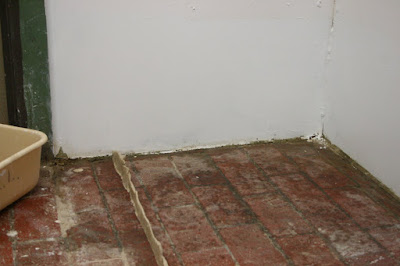 Ok, so maybe I should have saved that title for a case study that demonstrates those abilities in a spectacular way, like, the tiny chip of enamel that I glued back onto a cusp from a tooth measuring under 1mm in total length. In that case though, it shouldn't have broken in the first place. I'm just so pleased with the ease and simplicity with which this little sub-project came together.

Anyway, while preparing to install the cabinets, I was despairing that I would have to shim the crap out of them, the 65 year old brick floor slopes one half inch over 25 inches, the first photo shows this. So, I was thinking about floor leveling options, like that self leveling stuff that you put down before tiling a floor. I figured that it would take forever to set up thoroughly in that thickness, then it occurred to me that Hydrocal might be a workable option. 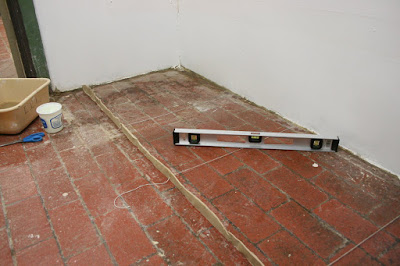 First I built a dam out of clay, which wouldn't stick to the newly waxed, slightly dusty floor all by itself. So, cleverly (I think), I smeared Vaseline along the bottom of the clay, then pushed it down, and bingo, a water tight adhesive gasket. I then taped three pieces of string to the high point of the floor, near the wall, and pulled them taught and through the clay. Using a bubble level, I set my desired height in string, then poured Hydrocal into the dammed area, smoothed it by hand and then trowel, checked the level again, and called it done. 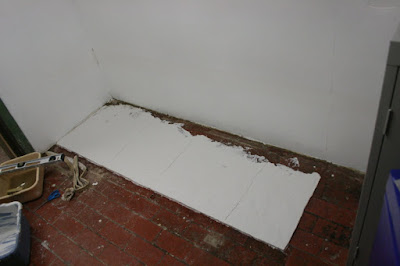 Here is the Hydrocal pad... And finally, almost PERFECTLY level with one cabinet on. I'll be back next week to finish up the installation in preparation for the arrival of the counter top. 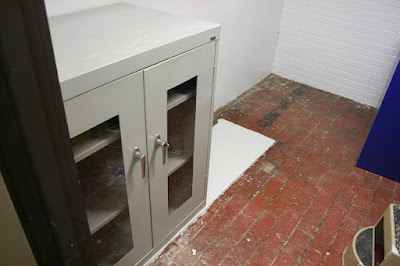 Posted by iPreparator at 8:20 PM No comments: 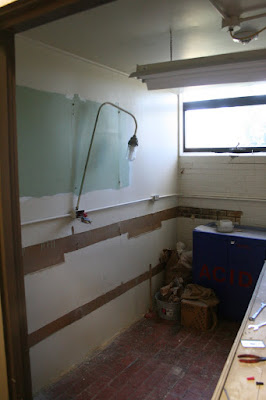 On schedule, just waiting for the Resistop counter and the installation of the fume hood, then all should be right with the world.

Sadly, not only did the shipping company deliver the Global cabinets to the wrong address, requiring several hours of my day to track down and pick up, the bastards managed to bash the hell out of the floor cabinets. After a little bit of pounding with a hand sledge and a block of wood, the doors open and close again, but this point may receive further airing here if the Global Industrial customer service people don't return my calls. 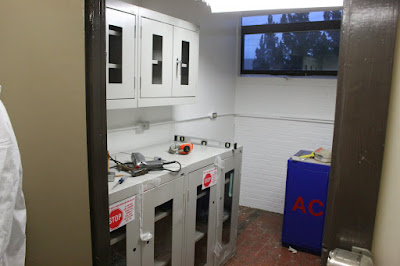 Posted by iPreparator at 7:38 AM No comments: 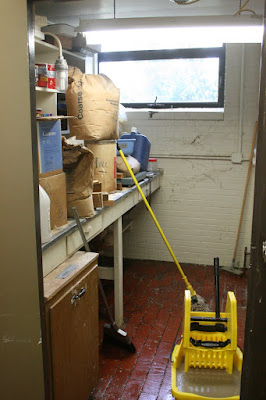 On coming episodes of This Old Preplab we will be remodeling this plaster room, gutting the left side that we see here, putting in the previously discussed fume hood, acid storage, and new counters, and generally making it look like this. Watch as we as we transform a cluttered workspace into a slightly less cluttered colored pencil rendering. 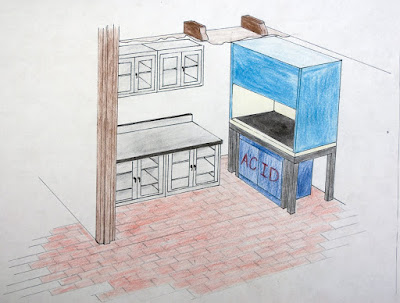 Posted by iPreparator at 9:45 PM No comments: 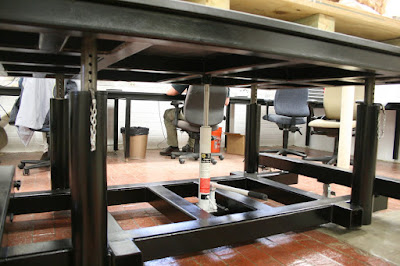 Back to the lift tables for a brief moment, here we can see the mechanism by which they do their magic. Centered under the table is a 3 ton bottle jack, operated with the lever the extends to the table edge. This jack is the only hydraulic part of the mechanism, lifting and lowering the tabletop, while the load is stabilized by the four pistons at the corners. The large, four inch diameter sleeve contains three machined nylon "doughnuts" that keep the two inch steel tubing aligned. Since hydraulic jacks are not designed for, or safe for, supporting weight, the two inch tubing is drilled at intervals for pins that hold the full weight of the table at rest. So, the table is jacked up, pins are set, and then the jack is released so that the table is safe to work on, around, and under. Voila.

Posted by iPreparator at 8:35 PM No comments: