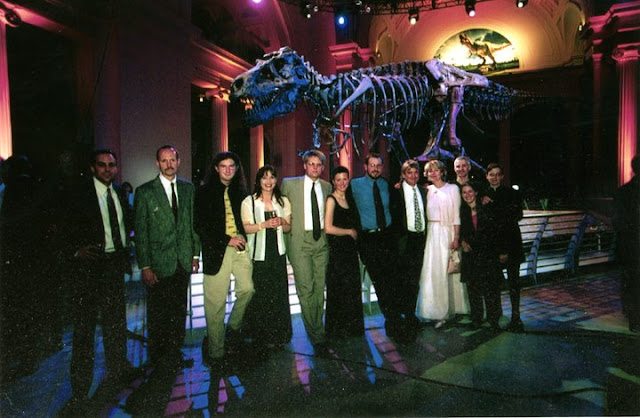 and We Built Her!

Is what the tagline on our official Sue Crew t-shirts said. Today is the ten year anniversary of Sue the T. rex's unveiling at the Field Museum. A whole lot of hoopla was involved in every aspect of this critter, and rather than get into any sentimental recollections about the great crew or the exciting project, I'll let Chris Brochu do the talking...

"In a sense, working with FMNH PR2081 has been a good example of what Sagan (1997) called "the marriage of skepticism and wonder." This animal may have died alone of old age, with not a scratch on him or her, but this was a 41 foot long bipedal carnivorous dinosaur. It had foot-long teeth, olfactory bulbs the size of grapefruit, and the capacity to balance an enormous head and massive tail on only two legs. Such an animal needs no embelishment."

Brochu, C.R. 2003. Osteology of Tyrannosaurus rex: insights from a nearly complete skeleton and high-resolution computed tomographic analysis of the skull. Memoirs of the Society of Vertebrate Paleontology. 7: 1–138.
Posted by iPreparator at 3:17 PM 1 comment: