Sorry I had to leave this behind 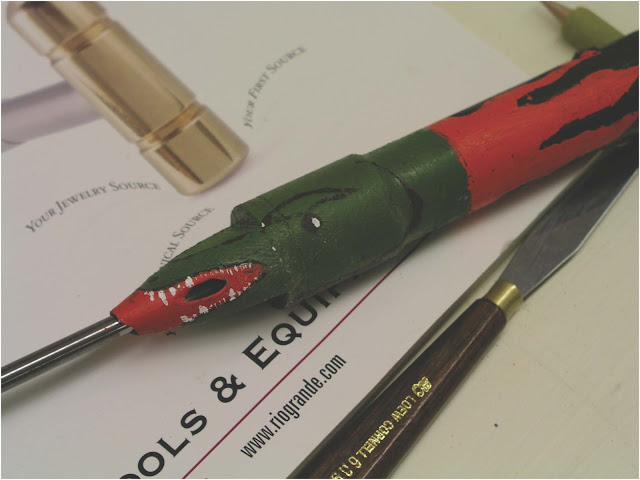 While preparing a talk for a visit to Berkeley next week, I came across this image of Mr. Stabby, my favorite Mighty Jack airscribe that I had to leave behind at the Field Museum when I left. He is seen here as painted right before he parachuted into the French hedgerow country in 1944 (we were preparing a lot of gars in those days). I miss you Stabby!
Posted by iPreparator at 1:44 PM 1 comment: 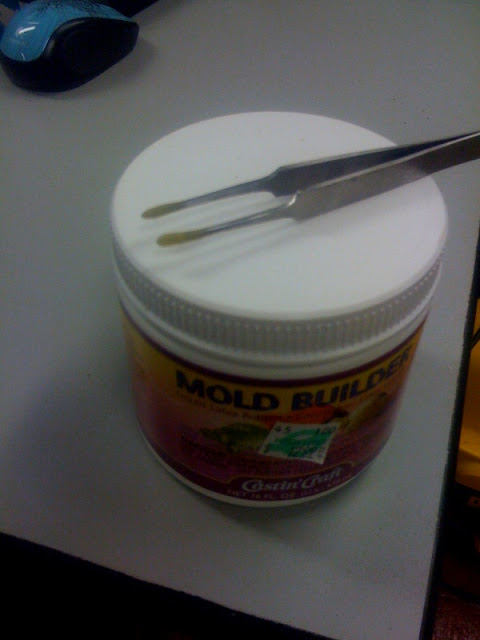 With apologies for the blurry iPhone photo, here is a nifty little trick that makes handling microfossils infinitely easier. Dipping your tweezer tips once or twice in liquid latex creates a cushioned bulb that allows you to handle small specimens that might be likely to break under the sometimes hard to gauge pressure applied with the tweezers. It also prevents JP Cavigelli's "watermelon-seed-effect," where a little bit of pressure and slipping sends the specimen flying across the room.
Posted by iPreparator at 1:17 PM 1 comment: 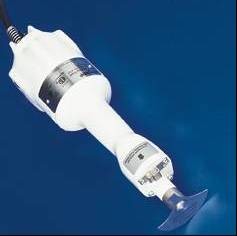 The gold standard in field jacket opening tools has long been the Stryker Cast Cutting saw, a medical tool designed to open plaster or fiberglass casts on broken bones, and has also been know to crack a calvarium or two. The advantage of this tool is that the blade oscillates through a very narrow range of motion, thereby limiting the amount of cutting possible per contact with a given surface (i.e. won't damage soft tissues easily). Since it doesn't make a full rotation, it is easier to control, safer, and throws slightly less dust than a circular saw.  While generally long lived, the downside of these great tools is that they can cost several grand when bought new. Used they sell for about $500, but it is very hard to judge the condition of a potentially abused saw like this. I've seen several "As Seen On TV" infomercials advertising similar products (like the Fein Multimaster, which I've always wanted one of), and those generally run around $200 as well. 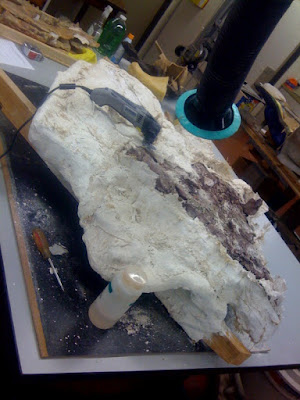 On a trip to Home Depot last week, I came across two $99 varieties of the Stryker-type oscillating tool. This blog has done an apparently thorough job of reviewing the full gamut of available tools, I haven't read most of them, and am just reporting on my experience so far with one of them. Home Depot had both the Rigid JobMax and the Dremel MultiMax available. After walking around with the Rigid for awhile, I put it down and bought the Dremel, for two primary reasons. The Dremel is corded while the Rigid tool is battery powered, one hassle that I'd rather not deal with is batteries running down mid-job. The second reason was very practical, the Dremel display had a whole rack full of replacement blades (for ~$10) while the Rigid did not. So far, I've been very happy with the Dremel Multimax, I'm about halfway through opening a large field jacket, and the tool has been a trooper. The function is very similar to that of the Stryker, feels much lighter and easier to handle over a long use, and doesn't seem to overheat nearly as rapidly as the Stryker does. The M-PACT cast cutting saw that was in the lab when I arrived (and which looked virtually unused) burned up the first time I used it on a large jacket. We'll see how the Dremel holds up over time and I'll report back then, but for now I'm pleased.
Posted by iPreparator at 12:55 PM 3 comments: