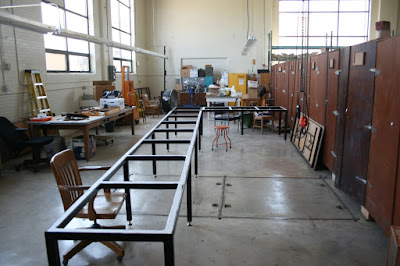 David Braley, the brilliant welder in the Pickle Campus facilities department, fabricated the metal framework for the work benches that line two walls of the lab. This bench is a giant L, 30" deep, 22' long on the longest arm, and 9' long on the short. This frame is incredibly straight and level, a very difficult task, but supremely executed by David. The whole construction is 2" tubular steel, supported by leveling feet for easy installation. The short leg abuts the long, and is both bolted and pinned, creating an incredibly stable platform to epoxy the table tops in place. 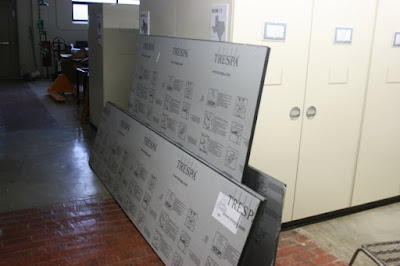 I decided to go with the same tabletop material that we used for years at the Field Museum. Bill Simpson performed some rigorous testing on samples from various manufacturers, and finally settled on Resitop, a composite of phenolic resin and craft paper layered densely and cured under pressure and heat. Then it is topped off with a melamine laminate top in a wide variety of colors and patterns. I have always been very happy with the Resistop, it is widely resistant (perhaps impervious) to acids, bases, and solvents. It is also resistant for at least a few minutes to direct flame. The company we ordered from stocks white, black, and grey, other choices cost much more, because you pay for each 5'X7' panel instead of just the material that you actually use. We went with one inch thick at roughly $23 per square foot, including a four inch high backsplash on the workbench. 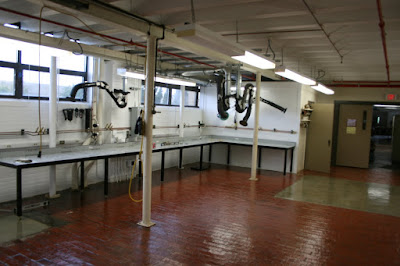 After spending quite a bit of time leveling the frame with the tops in place, the resin tops were epoxied onto the frames using West Systems Marine Epoxy thickened with a little bit of Cabosil to fill any void space, and were then clamped all around with C-clamps. Backsplashes were then epoxied and clamped, and will be filleted with more epoxy. 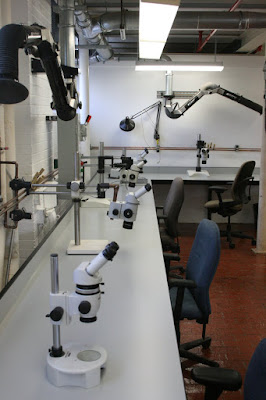 Posted by iPreparator at 4:04 PM 2 comments: 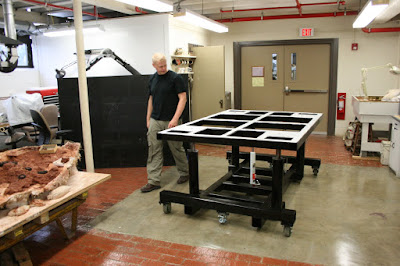 We would do General Patton proud, not only did I fight the Romans as a Carthaginian in a past life, but our new piece of furniture, MBT (Main Battle Table) 01, has just made its way into our loading dock. For scale, Sebastian > 2m. This table has a 5' x 7' work surface, adjusts between 28" and 40" lifted by a 3 ton jack, all by itself weighs about 900 pounds, and since I couldn't figure out how to keep tank treads from scuffing the new wax job on the floor, we went with wheels. Yeah, that sucks, but what can you do. This photo shows the table at full height, before we epoxied the Resistop table top in place.

And after, table lowered. I'll follow up some of the 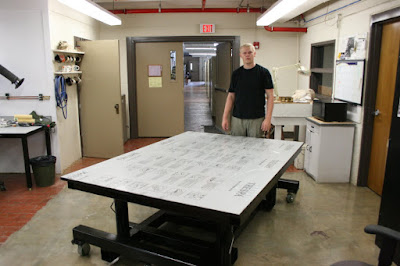 specifics of how it was built in the next post.
Posted by iPreparator at 9:20 PM No comments:

The labs at Bristol 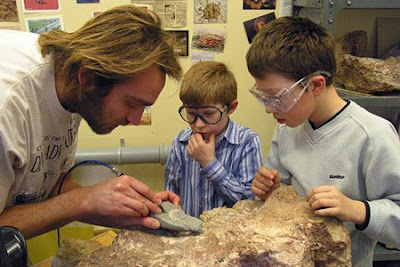 Remmert Schouten said he wanted to see a new blog post, so here you go dude. In addition to doing a great job putting together the adhesives and consolidants workshop, Remmert was kind enough to give us a tour of his lab at the University of Bristol. Here Remmert is giving a tour to the SVP preparators.

That's actually not true. However, he wasn't kidding when he showed us his lab shoes, actual wooden clogs. This might come as a surprise to us North American fossil people, but clogs are actually rated by the EU and UK as acceptable safety footwear, being resistant to acid and puncture. 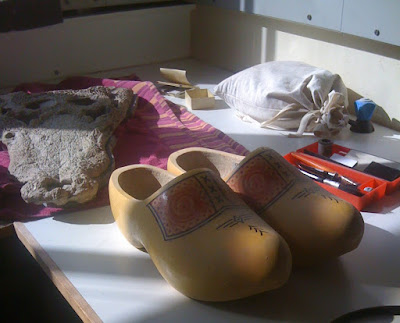 If you don't believe me, check out Wikipedia.

During the tour, we passed around another item worth discussing, a stone masons hammer. I've seen these called dummy hammers or round hand hammers, and are available from a few sources on the internet, usually for about 25 or 30 US dollars. These hammers are used with typical chisels, a method that I like quit 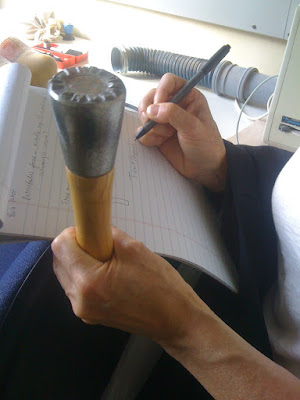 e a bit in harder matrices for removing large quantities of matrix. Having a range of hammer and chisel sizes allows a great degree of accuracy in removing matrix, I've even prepped right up to the bone surface this way.
Remmert described the ability to finesse a wide range of strike force out of the mallet by adjusting how much you choke up on the handle, and by what part of the head with which you hit the chisel. A blow from the broad end of the tool will direct more force at your chisel and block for coarse work, and gentler taps towards the base of the head where the steel meets the wood will allow for gentler and more precise work.

Thanks very much to Remmert for the opportunity to see his lab, and for the work he contributed as part of the Host Committee for SVP Bristol.
Posted by iPreparator at 7:16 AM No comments:

Well, dear friends, my mind is blown. I've seen some surreal shit in my life, not the least of which are the Salvador Dali museum I visited last week, and the direct flight from Paris to Dallas Forth Worth I-airport.

However, starting two nights ago on Letterman Steve Martin played the banjo with the convincing head of Muammar Qaddafi, which I could handle. But tonight, of all bands, KISS performed on Dave. Gene, Ace, Paul, and Peter. In their seventies. Not the right venue. Followed immediately by Craig Ferguson and a bunch of other people in blonde wigs lipsyncing Mmmbop. Then Chick Corea on freakin Jimmy Fallon?!?! Disgusting.
Posted by iPreparator at 9:55 PM No comments:

Like many paleontologists, I took advantage of this year's phenomenal SVP location to spend some time seeing other European paleo. My trip would have been an exhausting whirlwind, if not for the tremendous energy that this meeting generates for me every year. Also like many other paleontologists, I ride a high for months after we all go home.

This meeting generated several topics to post about, and as I get my photos, notes, and thoughts sorted out, I'll be following up on those, hopefully having it all wrapped up by the end of the week. I'd have more done tonight, but I'm going to see Zombieland. Priorities, priorities. Briefly, my schedule looked like this:

Sunday- Arrived in London, met up with Sarah Werning, went to pub. Slept on the floor of Sarah's bathroom.
Monday-Started day with tour of the Natural History Museum Paleontological Conservation Unit. Had a late lunch, saw the fossil gallery, visited the Wallace and Grommit exhibit at the Science Museum. Caught bus to Bristol. Added London to the list of major cities that I've been to and only seen the science museum and bars.
Tuesday-Exciting 8 hours at adhesives and consolidants workshop (really!) Went to pub and talked about adhesives and consolidants for a few hours. Went to another pub and pissed people off by talking about adhesives and consolidants some more. Wednesday begins about here.
Wednesday- Excellent day of some talks, posters, mostly meetings with other folks. Great discussion with Amy Davidson, Greg Brown, and Bill Parker about the role of preparation within paleontology. Welcome reception in the evening, followed by pubs, Indian food, pubs, and then clubs. Some members of our group were picked up by the "classy" scantily clad Bristol ladies that Jeff Martz writes about, this evening ends on Thursday as well, returning to my hotel at about 5:00.
Thursday-Absolutely brutal schedule, Romer talks, Triassic talks, Prep talks, and birds all apposed each other. Some really good talks were presented at the prep session. Preparators Committee meeting was very productive. Saw David Attenborough give an excellent talk on Alfred Russel Wallace and Birds of Paradise, wonderful night. Hosted a student roundtable on getting non-academic jobs: prep, collections, contract paleo, government paleo, etc. Afterwards, Jeff's Beaver Stuffing event took place.
Friday- Wow, this is getting ridiculous. I'll just say the rest of the trip was a blast- Spent all night on Saturday hanging out with as the crowd slowly dropped away, the last SVP allnighter was Sarah Werning and I hanging out in the hotel lobby, watching the Bristol police haul away some disorderly young girls. I took a cab to the airport, and headed to Paris for five days. I'll have some photos of the prep lab there to post shortly.
Posted by iPreparator at 1:11 PM No comments: