Computed Tomography In The Time Of Fossil Preparation

[The readership should expect a significant improvement in this post over recent ones, which have received complaints.  Granted, those complaints come from bloggers whose bread and butter is posting links to new papers, so I'm still going to stand by my original contributions, however uninspired they may be. This one should be good though. Taxonomic details will remain vague until analysis is complete.]

The University of Texas at Austin is well known in the paleo community for its innovative and groundbreaking work with CT technology, that was certainly one of the strengths of the lab that I was most aware of before taking this job. I had already spent many hours cruising the DigiMorph site, and knew how useful the technology was as a resource for imaging specimens (and for finding awesome desktop background images), but it took actually seeing the process in action with a few specimens to realize just how amazing its integration into my workflow could really be.  You can expect to see a series of posts, talks, papers (including talks by Sebastian Egberts, Bill Simpson, and myself at the Third Annual FPCS meeting in Chicago later this month) on this topic in coming months and years from VPL, this post will detail the process of scanning a block outside of our UT lab. 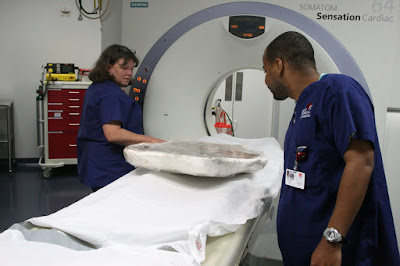 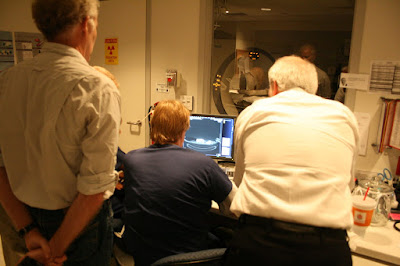 Last fall Sebastian was working on a block filled mostly with larger elements of a partial skeleton, but kept uncovering tiny bones in some parts of the jacket. We came to realize that there could be important taxonomic information present in the location and orientation of the bones in the block, and wanted both a three dimensional record of where elements came from as they were before being removed from the jacket, and an idea of what to expect as work progressed. The larger scanner at UTCT accommodates objects up to 15cm at the long axis, and is intended for individual elements, not large field jackets. This block was approximately 75cm long, and would not fit in our scanners. Through the generosity of Dr. George Rodgers, we were able to have the jacket scanned at the Austin Heart Hospital in a medical CT scanner, which in addition to being incredibly useful, was a fun experience for all involved. 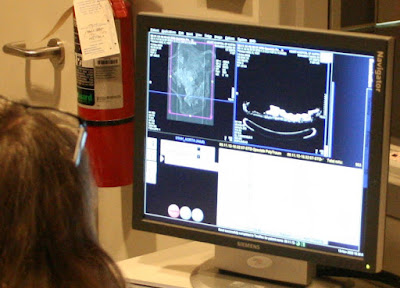 The Heart Hospital has a software program that is programmed to render the Xray data based on density of biological tissues, using a series of presets to highlight whatever it is that the physician is looking for. These presets were not very effective at discerning fossil bone from rock, so the raw data was sent over to the staff at UTCT for final processing. We can use a combination of the original slices and 3D models generated by the CT lab to help us in the prep lab. This allows us to gain significant insight into what we will likely encounter while working through the block. The final image is a close up of the CT techs monitor, which gives a brief snapshot overview of the block on the left, and the actual Xray slice on the right, which is perpendicular to the long axis of the block.
Posted by iPreparator at 2:08 PM 2 comments:

Following up on shipping

Ok, as promised a few weeks ago, a quick look at the method that we came up with to pack these specimens for shipping. I'm gonna state at the outset that I'm not really committed to this post, so if it suffers for quality, well, don't be surprised. 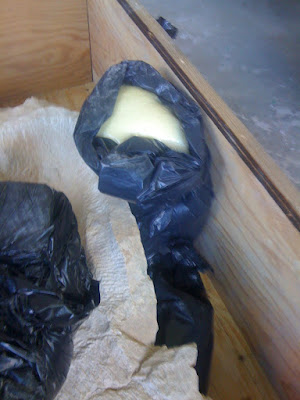 As with the Homotherium skull, we thought it prudent to immobilize the blocks of rock completely, lest they rocket through the side of the plywood when the package inevitability negatively accelerates from 80 mph to zero in 1.4 seconds. And like the Homotherium cast, we used polyurethane foam on the blocks that were 125+ lbs. Basically, I just packed a plastic bag between the wall of the crate and the specimen, then filled it with expanding foam. Here are some pictures. 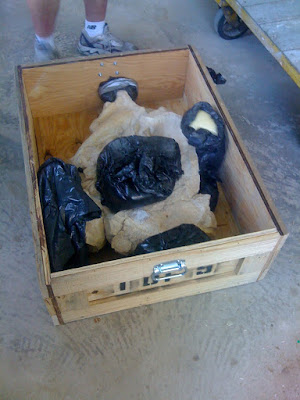 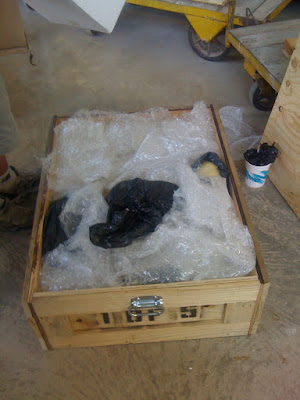 One bag of foam was set on top of the block, then the lid was placed down to create a solid and tight fit. Finally, all of the empty space was filled with bubble wrap.  That was a purely psychological move, as it would almost certainly do nothing if the rest of the packing failed in any way, other than maybe keep pieces from floating around if any chunks of rock spalled off.
Posted by iPreparator at 10:42 AM No comments: