More traditional uses of fire in the lab... 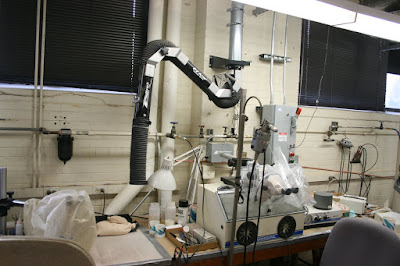 Disclaimer: No Fossils Were Prepared in the Following Blog Post


This was an exceptionally busy week in the lab, and the only time we touched fossils was to get them out of our way. The first major phase in the lab renovation began on Monday, with half of the room being repainted. Some big cabinets with not much in them were taken off the walls, large cracks in the masonry were sealed up, and all of the existing airlines were removed, more on those soon. The walls were then given a fresh couple of coats of white semi-gloss enamel, which really makes it a whole new room.

This project was in preparation for the main event of August, replacing the compressed air delivery system. The existing airlines were composed of black pipe, galvanized, copper, brass, 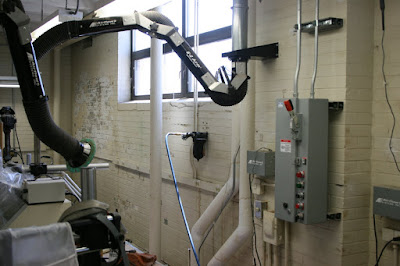 and maybe PVC. The compressor and tank is outside the building in 100 degree heat for most of the day, passes through the wall into a 70ish degree room, and immediately begins condensing tons of moisture in the airline. We drain about half a cup or more of water out of the tank each day, and about the same out of the water trap inside the lab. The mix of metals in the system ensures quite a bit of corrosion in the parts, most every fitting has some form of rust inside of it. The air tools have recently begun clogging at a high frequency requiring complete breakdown for cleaning several times a week.

So, the fun stuff. 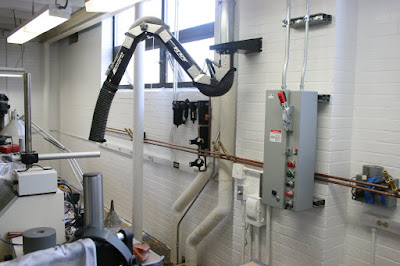 With the help of the very able and German Sebastian Egberts, I've spent the last half of this week installing a completely copper air system. While I was shuttling back and forth between two Home Depots and one Lowe's buying up every fitting they had in stock, Sebastian measured and cut the copper pipe and soldered the quick connect fittings into place. After two full days of work, we have the system nearly complete and leak free, another post will follow up in detail the process of getting the system in place, with, yes, more pictures of fire in the lab.
Posted by iPreparator at 11:17 AM

Uses Of Fire That You Never Heard Of

When I was a Young Kid, I would always ask my dad if he had any leftover papers from the working office. Once he’d produce a box filled with paperwork, I would go outside of home to burn them near any mango tree.