How happily I smash rocks with thee....

Today, a member of the preplist asked for photos with scale for use in recreating that ubiquitous paleontology icon, the Marsh pick. In the VPL prep lab archives I've come across a letter from Wann Langston to someone at the AMNH (or maybe it was a response, anyway, correspondence of some sort from somebody to somebody) from the 60s or 70s discussing the multitude of pick heads boxed in the basement with a price of $7 plus postage for anyone wanting one. Damn that those days are behind us! As soon as I find that letter again I'll post it here.

What is a Marsh pick, some might ask? Well, youngster, before the rise of the Estwing Rock Hammer

, the Marsh pick was "the universal field tools of vertebrate paleontologists," as described by Ned Colbert in "A Fossil Hunter's Notebook"(1980, p. 131). His wife, artist Margaret Colbert, incorporated it into the design for the cover art of the Society of Vertebrate Paleontology News Bulletin, and it was later adopted by the SVP as the organization's official logo, which can now be found on all sorts of nifty SVP swag (proceeds of which go to support the Society.) I've compiled what information I have at hand here in this post, and would be highly interested in hearing from anyone who can add to the fact or lore associated with this instrument.

The first printed reference I have seen relating to our story comes thanks to blogger Michael Ryan, who contributed the following bit of paleo history to the internet in 2006 (there were blogs way back in 2006? Holy crow!) Beyond this, I do not know much about the genesis of the famous whacking tool.
I have been told that this is not the earliest example of such a tool, and that it was devised by O.C. Marsh himself, and it is certainly possible that Brown modified the design in such a way as to improve it. Additions like the U-shaped spring clip might be what led him to claim inventor status, and that Brown's dinosaur pick only later became synonymous with Marsh's. But, like I said, I don't know. It is exceedingly difficult to tell from historical photos whether pictured picks are the ones we are discussing or standard large railroad picks. There is a photo in Dingus and Norell (2010, Fig. 23) of Brown in the Red Deer River in 1912 that looks Marsh picky. Chime in if you can prove the case one way or the other. 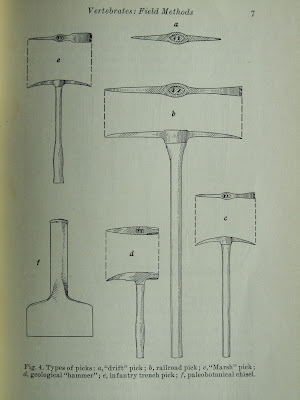 The next Marsh pick sighting of which I am aware is courtesy Charles Camp, in Methods in Paleontology (1937). After discussing how it should only cost $10 a day to hire a team of horses and a "Fresno" scraper (a plow) to clear overburden, Charlie gets into the nitty-gritty of pick selection. His unapologetic opinion follows as such:


Tools for excavating include: shovels, large railroad picks, small "drift" picks, paleontological or "Marsh" picks (fig. 4c), which, by the way, are more expensive and scarcely better than a good, light "drift" pick (fig. 4a). A crowbar is sometimes handy.

Ouch. But something changed the minds of a generation of paleontologists in the 43 years between Camp's thoughts and Colbert's observation. Although, I don't use one in the field very often either, my long-handled Estwing rock hammer

has served me well for >10 years. [A brief aside: I can't stand those Estwing Geo/Paleo Picks

. I just find them to be sized all wrong. Too short to be useful as a two-handed earth mover, too long (only slightly, though, if you're 6' plus) to be used accurately as a one-handed rock hammer. Also, the weight is all wrong. It fills a middle niche that doesn't really exist, in my opinion. To move serious rock, you need mass X acceleration, a strong point, and the leverage of a long handle for both a decent swing and prying power once the tool tip is embedded in your target. Target, I said, not the fossil. I suspect that if you think the Paleo Pick is for you, a few lessons on the proper mechanics of a good 3lb pickax might change your mind. Oh! And the padded handle! You cannot slide your hand along the length of haft as you swing, which results in even more and less efficient labor! And the stupid handle is round! You've got to squeeze it tighter to keep it from rotating, which leads to even more fatigue! Somebody's gonna hurt themselves with one of these.] Ok, that wasn't brief, and we haven't even addressed the original request, pictures and measurements of the tool! From here on out, I'll let the pictures do the talking, with details in the photo captions. Like I said, I want to hear more if you've got sources!

[You can click on the pictures here for full size images]

I liked the earlier version of Estwing's Geo/Paleo pick - it was very handy for breaking up moderately consolidated rock or soils and was at a size where you could easily carry it a hefty distance. Unfortunately, Estwing has really cheaped out on the construction during the last 10 or 15 years; what used to be a solid handle has been transformed into a metal tube that bends under any kind of normal use. The metal is also much softer than in the old version, meaning the thing wears to a nub after about a week of light use!

I disagree - there is a perfect "middle niche" for me. As a smaller female, this is my tool of choice for plowing through overburden. Guys generally prefer a larger pick, but for me, the Geo/Paleo pick is the perfect size and weight for a whole day of overburden. And I've used the same pick for a total of months of overburden over several years, and it's still unbent and decently sharp. Maybe your mudstone/sandstone is harder than ours.

I am the one who posted on the preplist, I was making it for a friend but now I will have offer it among the products of my yet to opened (fall cross fingers) online store.
I made so many custom tools for fellow Paleo-people I wanted to make a go at making them on a larger scale.
The Marsh Pick or some version of it has been asked of me several times, including at least once as the top of a hiking cane.

its a pleasure reading all these informative things.
Josiah Wintermute

The new Estwing 'Burpee' pick seems to be very similar to the Marsh Pick, and is going to be extremely popular with palaeontologists.

Is there any way of buying an SVP Colbert pick, or have they all been sold?

I too must rush to the defence of the more recent version of the Estwing Paleo pick. Mine has several years hard use and is not noticeably worn, and has shown no signs of weakness in the handle or elsewhere.

Dr. Amaral, or as I knew him ‘Uncle Bill’, carried a marsh pick across the painted desert as we fossil hunted. He used it as a walking stick at times. Nice efficient little tool for clearing over burden and we even extracted fossil blocks with it.